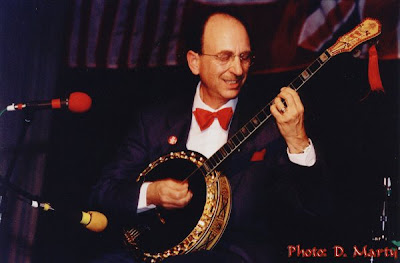 During my tour to the USA I met up with ace banjoist Dave Marty. We had lunch together and drank tea whilst playing a few tunes. I asked Dave to tell us a little about his career and this is what he said...

At the age of 12, I began teaching myself the ukulele. Shortly before I turned 16, I asked my Dad to get me something bigger (I had a guitar in mind.) So, for my 16th birthday he got me a banjo (an Epiphone Mayfair - 2nd from the bottom of the line). I had so much trouble adjusting to the size of the neck that I put it away for the next three years and kept on with my ukulele.
When I was 19 years old, I was in a pizza parlor enjoying my dinner when two guys appeared –one with a banjo who climbed up on top of the upright piano and the other who sat down at the piano. After hearing a couple of tunes, I decided I was as good as or better than the banjo player, and he was making money doing that. Then and there I knew what I wanted to do with my life. Shortly thereafter I took my banjo out of the closet, where I had put it three years earlier, and started practicing. Several months later I joined the musician’s union in late 1959. One month later I got my first professional job playing with a pianist in a pizza parlor!
Although I have worked in other fields during my musical career, my occupation for the last 48 years has always been that of a dedicated professional banjoist. I am completely self-taught, never having a single lesson, and learned everything I know by ear and from working with other top-notch (& a lot of not-so-top-notch) musicians.
Some of my early experiences with the banjo were playing in high school rallies and sports games with the band. After I turned professional, I played the beer hall/pizza parlor circuit, followed by banjo night clubs in San Francisco, Chicago, New Orleans, New York World’s Fair, Greenwich Village, Dallas, Fort Worth, Corpus Christi, Atlanta, Kansas City, Florida, and Florence, Italy and Hollywood.
My first banjo idol was Eddie Peabody. As I heard him play was on the radio in the late 1950’s, I wondered why my banjo didn’t sound like his. I later found out he played a different tuning, (I used guitar tuning) and that he tuned each of his strings one note higher than normal. So, I bought all of his LP’s and studied his technique for a number of years. It was Georgette Twain who arranged my first meeting with Eddie in 1961. He and I remained close friends and kept in touch with letters and visits for the last ten years of his life.
Perry Bechtel was another one of my idols. I was fortunate to have met him in Atlanta eight years after I bought his first and only album, “The Man with 10,000 Fingers”; it was the first time I had heard classical music performed on the banjo. Perry and I were close friends and corresponded for over twenty years. What a difference in playing styles between Perry and Eddie.
Other banjo inspirations and recordings that I studied and admired very much were those of John Cali, Jad Paul, Paul Martin, Clay Landrum (Henry Clay), The Big Ben Banjo Band, Paul Miller (The San Francisco Marching, Trotting, and Walking Band), and Freddy Morgan (of Spike Jones fame.)

Musical genres that supply my motivation are from the 1800’s up thru early dixieland and traditional jazz, along with the big band music from the early part of the 20th century. I find this type of music exciting because of its musical perfection in substance and inventiveness along with the chord changes used in that era of music. Classical music excites me because of its exactness in structure and beauty.
Musically, the banjo ‘tugs’ at the American heart because of the ‘sound’ derived from the instrument; it is unlike any other American musical instrument and can be a happy one. Culturally, the banjo is a big part of very early American popular music and dixieland jazz and country & western music. Furthermore, music played on the banjo stirs up many memories, particularly for senior citizens.

Some major accomplishments during my career have been:

« Band leader and lead banjoist for the Red Garter nightclub chain nationally and in Europe for thirteen years (1963 to 1976).
« Along with David Sturdevant on guitar and Abe van der Meulen on side banjo, the three of us became the San Francisco Medicine Ball Band in 1970 and recorded our first LP, On a Slow Boat to China in 1976.
« Performed at Earthquake McGoon’s in San Francisco with Turk Murphy and his band as featured solo intermission banjoist, sitting-in with his band six nights a week for a decade (1970 to 1980);
« Featured Star Attraction aboard cruise ships world-wide for 17 years; (1980 to 1997);
« Toured with the late, great Morey Amsterdam as his opening act;

Dave will be appearing at the annual Spring Fling banjo festival in Boston, USA next weekend.